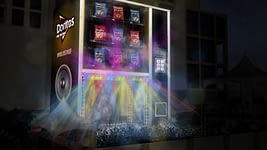 Vending machines and social media are becoming more and more in sync these days, but never have they reached the level of grand interactivity that South by Southwest attendees are going to witness next week. Thanks to the BoldStage, those enjoying the SXSW music festival will vote for music’s rising stars. And they will do so using a Doritos vending machine.

You read that right. According to Mashable, the event will feature a 62-foot stage in the shape of a snack machine that will host several up and coming musical acts. Users can tweet with the hashtag #BoldStage throughout the concert and have their pictures and tweets showcased on the massive screen, while also voting for the musicians they like best. With the main stage being updated with fan contributions in real-time, this could very well be the most interactive concert experience ever. For vending machine enthusiasts unable to make the event, Doritos will stream the BoldStage on Facebook.

The BoldStage is a great way to combine the worlds of vending machines, social media, and music to create one unique experience. Do you think we might ever live in a world where 62-foot vending machines are the norm? Snackers everywhere will simply have to wait and see.